Read ALL the days!!

Today was another move day so we packed up, grabbed breakfast and headed out at check out time 11am. It was a gorgeous sunny day today and the hotel koi pond was reflecting light dots up onto the little roof above. It was lovely to watch. 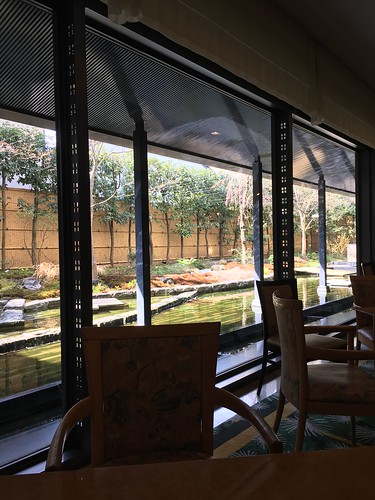 We were off to Hiroshima and I thought that we had a bit more time than we needed to ‘do’ the area there, so stayed a bit longer in Kyoto, leaving our bags at the hotel.

A quick stop for Adam for his much loved grape Fanta and we were off. 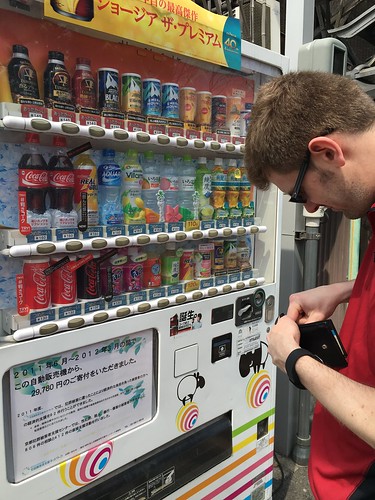 First up was Nino-ji castle, which was walking distance from the hotel (about 25 mins) so made sense now we had no bus pass. The tickets were purchased from a vending machine in the wall (standard) for anyone who is planning a visit. 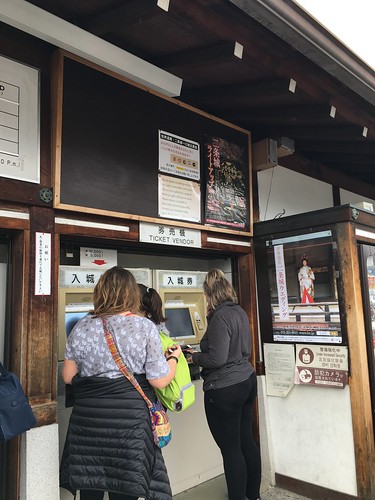 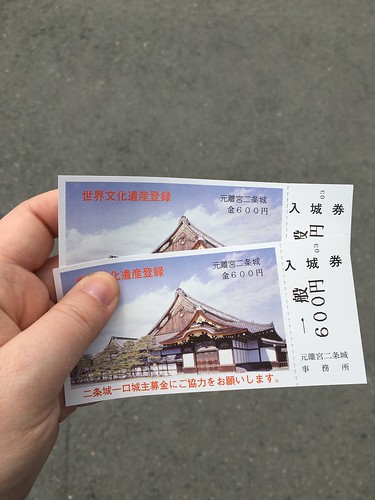 The castle had a palace inside which we went to check out in the name of travel blogging. Adam was a bit over the temples and palaces by this point (we have like 10 days to go.. uh oh) but he obliged and came round with me. 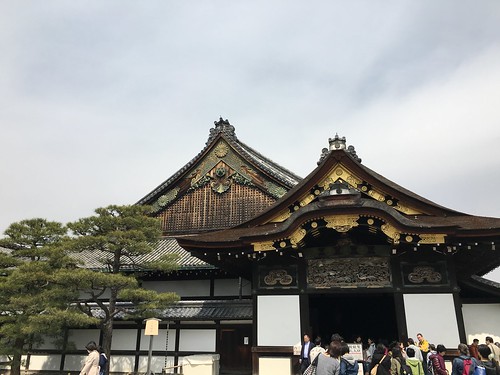 The thing I found really interesting about this palace is that it has nightingale floors, which squeak with the tiniest movement making a sound like a nightingale bird. Its a really unique noise – but imagine if you will – a whole forest of them but strangely hushed – and that’s what you get when hundreds of people are walking across this at once. It makes for a very strange atmosphere. 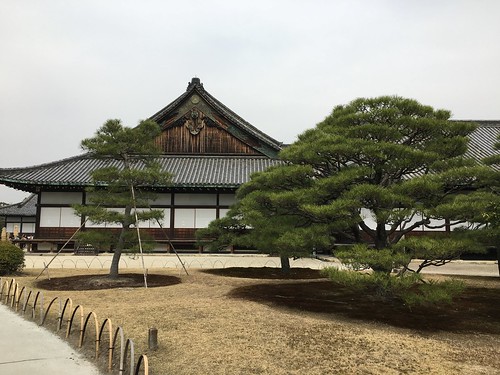 I’ve no pictures or video inside as the walls all have huge murals on them, or at the least replicas, which are incredibly fragile and don’t like sunlight or flashes.

The originals were painted by the shoguns family and heirs in many instances and even the replicas are stunning. In most cases they were almost golden backgrounds, with painted trees or animals on them. My particular favourites were the tigers and peacock ones as the colours against the gold were spectacular.

Back outside there were further ponds and gardens (a big thing over here) and plenty of cherry blossoms just coming in to bloom. 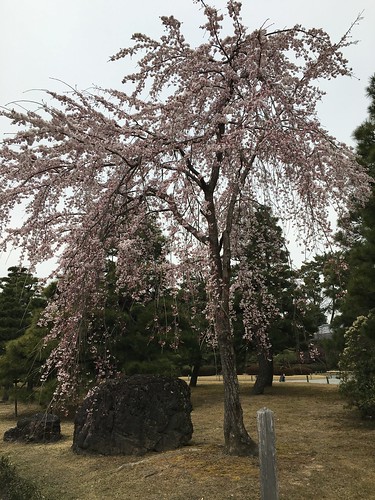 The gardens were as per all the others – perfect – I really am a fan of the Japanese garden now. 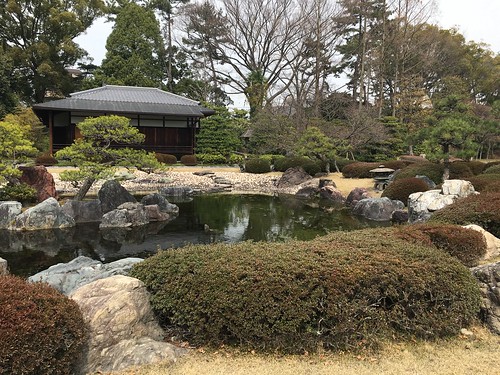 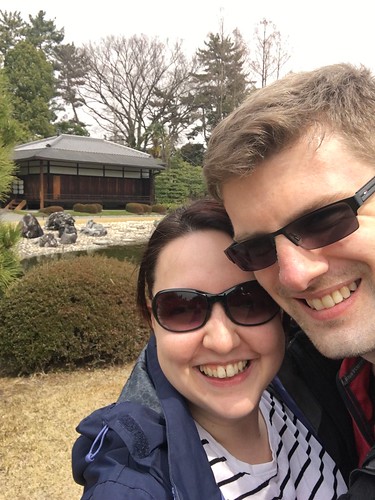 There is a viewing platform still on site, which must have been some sort of defense jobbie previously, but now overlooks the moat and gardens. Worth a look, even if your legs are giving up. Its not that high… like a normal set of stairs in a big house to be honest but we were both pretty trashed so felt like so much more! 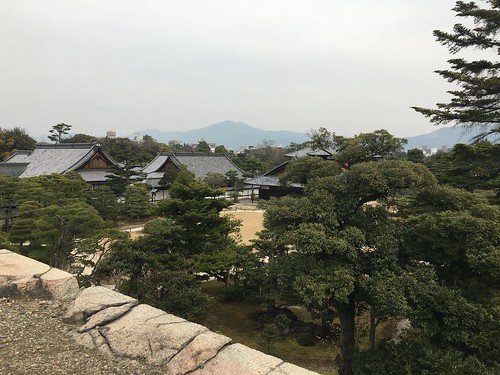 After a good wander round we departed with rumbling stomachs. We ended up going back to the restaurant we’d eaten in on our first night. It was on the way back to the hotel, the food was good, filling and a bargain – what more can you ask? So – usual please! 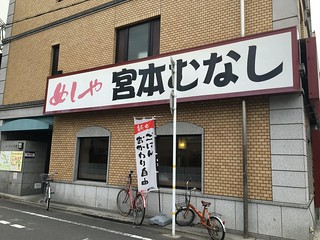 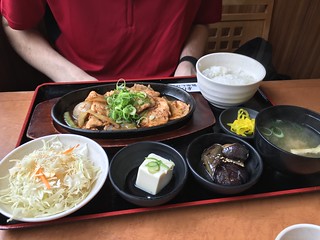 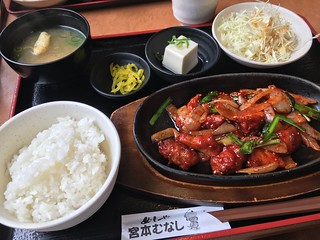 Post lunch we were subway bound (230Y) to Kyoto main station to grab some tickets to Hiroshima on the bullet train. 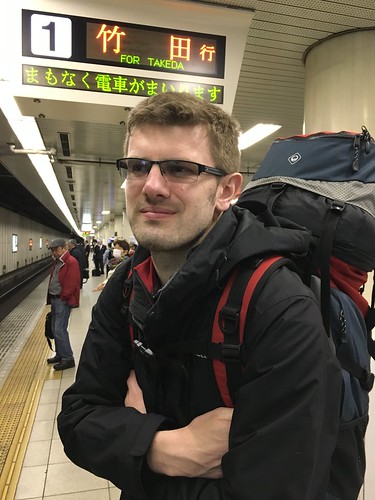 I love the green car. Flashbackers we may be – but I don’t care. The shinkansen is awesome regardless, but the green car is just epic. Look at how much space you get!! 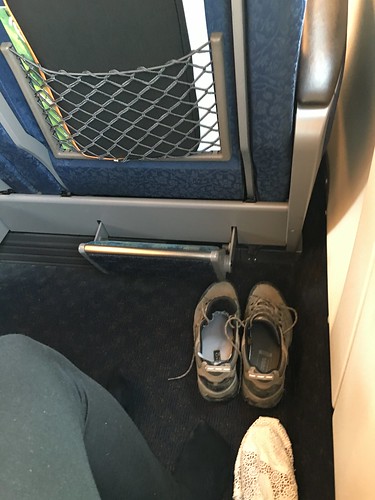 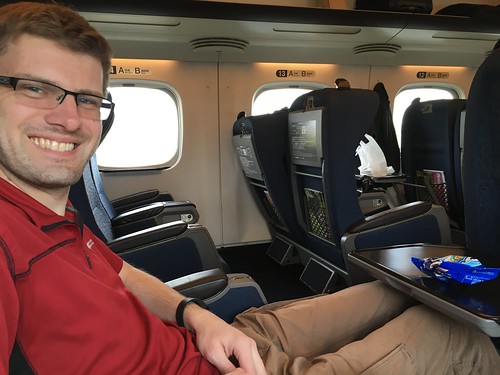 After a thoroughly enjoyable train journey (who knew they even existed?) we arrived at Hiroshima station about 5.30 and walked the 9 minutes to our hostel.

This was Adams first experience in a hostel, and quite frankly he was terrified. He really had no need to be, it was not a bad hostel (Hiroshima Hana) and we had a private double room with an ensuite. 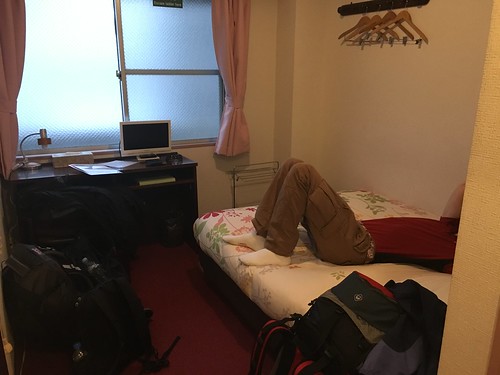 This one required shoes off though so wandering around in slippers was a new experience!

The hostel had a little washing room up on the roof terrace (of course you’d put your washing machines up there… who has them inside these days?!), and plenty of info in the foyer (which is why I love hostels). 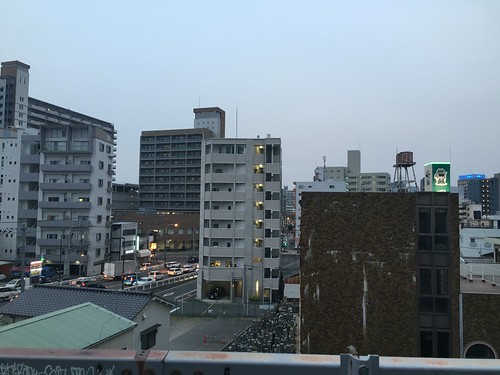 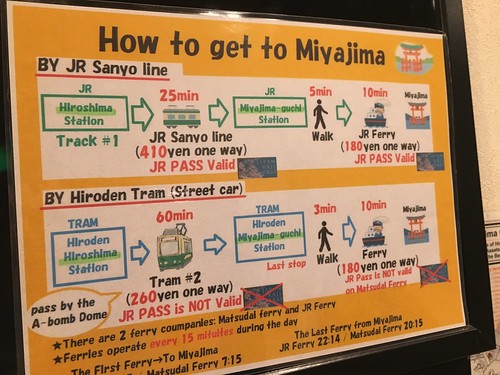 The living room and kitchen had a beer vending machine (of course), a guitar, and kids toys along with books and dvds. 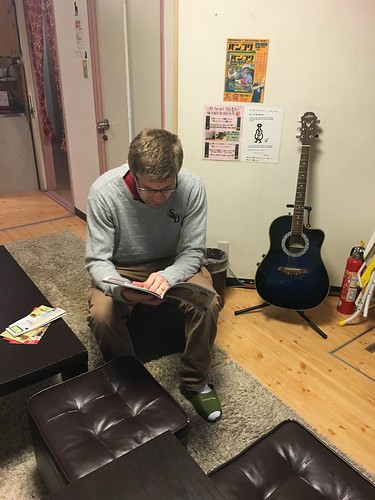 It was getting close to nosh time again and we’d spotted somewhere advertising teppenyaki on our street so staying local was the aim and off we went.

Now as far as ‘eating like locals’ goes – this was it. No english spoken. No english on the menus at all, and all other patrons clearly families who live locally. 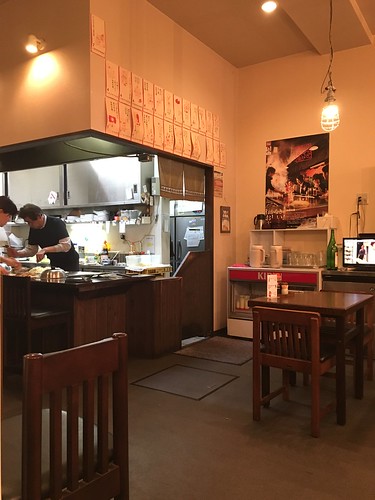 So google translate got involved and we pointed and gestured our way to two massive piles of… stuff. I’ve since learned that this is okinomiyaka. Essentially a pancake with noodles, lettuce, beansprouts and sauce. 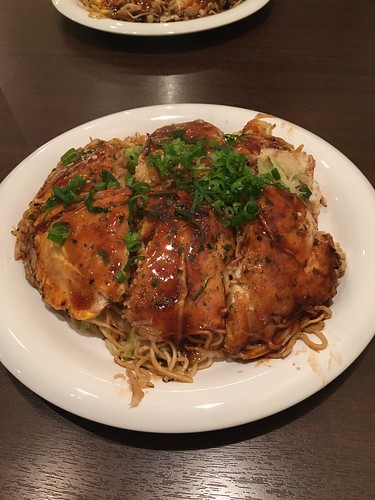 Also known as a plate of carby yummy goodness.

Mine came with rice and cheese which is what google translate had told us. Adam ordered a ‘meat’ one which came with some sort of pink stuff. We are apparently never talking about this again as we still don’t know what it was, and I don’t think he wants to know either.

The sauce on these is out of this world good, and I am absolutely intending to try and recreate its beauty at home. Along with the rest of the tower of deliciousness.

Suitably stuffed full of food, we waddled to the nearby shop to pick up breakfast items for a speedy exit the next day. And came home with a verifiable feast. 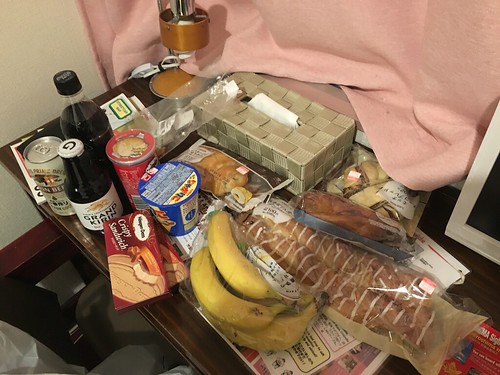 Including one of those ice cream sandwiches. 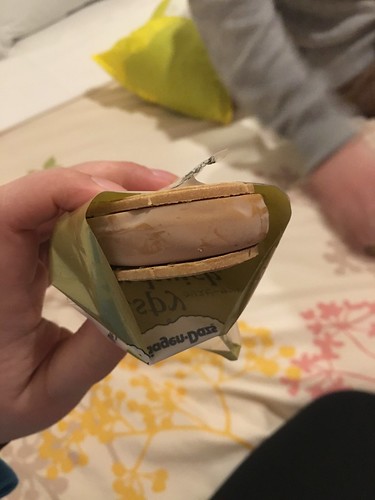 Which I then ate.

A few hours later I really regretted eating all those carbs and sugar for dinner.

Rice, noodles, pancakes, cheese, ice cream wafer sandwiches and chocolate bread are not a good combo when I am meant to be on low GI! All i’ll say is that I am extremely glad we had an ensuite. Grim.